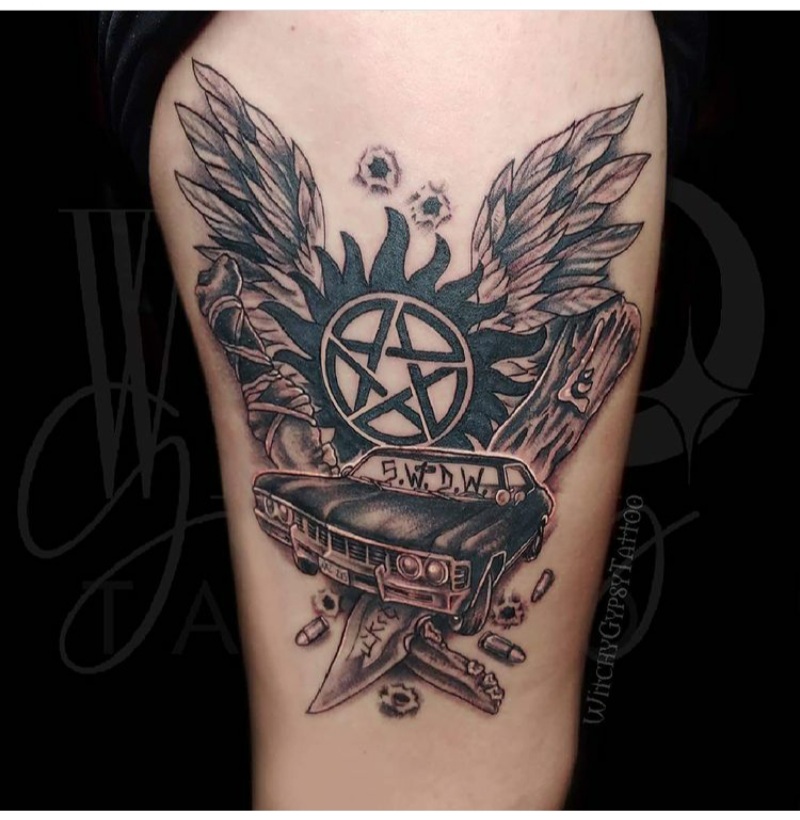 After 15 seasons, Supernatural has finally ended but for fans of this show, the show still lives on and the Supernatural ending doesn’t mean they are done with the show yet.

Most fans like myself have rewatched the show and still keep rewatching the show and a lot of fans have also gotten some tattoos to express how much they love the show. Here are 10 of the best supernatural tattoos by fans that we found.

This is how the brothers refer to themselves. Dean calls Sam bitch and Sam calls Dean jerk. It’s more like an inside joke, brothers being brothers.

This is a quote by Dean Winchester, explaining the legacy their father left behind for him and his brother to continue. Saving people, hunting things, the family business. But for this particular tattoo, there are also, angel’s wings, angel blade, impala, the anti-possession tattoo.

This is something that Bobby Singer said to the boys (Sam and Dean) to let them know that they were his family even though they weren’t blood-related.

The first blade was the weapon that was used to slay the knights of hell. You must wield the power of Cain’s mark in order to be able to use the first blade. Without the mark of Cain, the first blade is just a bone and can’t harm demons.

The impala, anti-possession tattoo, mark of Cain and angel’s wings

The anti-possession tattoo: To avoid demon possession, Sam and Dean have this tattooed on the top left side of their chest.

The impala: Is Dean’s car given to him by his dad. It’s the car the boys used for their hunting business. Dean loves this car so much that he calls it, Baby.

Angel’s wings: The angel’s wings stand for Castiel, an angel who became part of the boys’ team, they were more like family and he was their guardian angel.

The Mark of Cain: The mark of Cain was passed on to Dean from Cain to be able to use the first blade.

S.W D.W: These are the boys’ initials. They stand for Sam Winchester and Dean Winchester.

The mark of Cain supernatural tattoo

If there’s one thing that Dean really likes, is pie (aside from Baby of course). So he always reminded Sam to get him pie whenever Sam was going to the supermarket.

The anti-possession was a charm that Bobby gave to the boys after Sam was possessed to protect them from being possessed again. The boys had the charm tattooed on their chest so they could never be possessed.

This is a knife that belonged to Ruby, a demon. It was the only knife that could kill a demon.

We are a participant in the Amazon Services LLC Associates Program, an affiliate advertising program designed to provide a means for us to earn fees by linking to Amazon.com and affiliated sites.